Below is the latest colourful dashboard updated from 10 November 2017 by one of our research partners, Ineichen Research & Management (IR&M).

Observations
In the IR&M dashboard, green is good, red is bad. Markets respond mostly to change, so the dashboard in isolation means little as it needs to be compared to a previous dashboard (top right hand corner). Changes vs last update are circled.

The key take outs from Table 1 are:

Important: Ineichen does warn about complacency in financial markets and the very low level of volatility across markets does seem at odds with the volatile political climate.

When compared to the dashboard in June 2017 (Table 2), there have been some noticeable positive changes to fundamentals and economic trends, supportive of the improving global state. 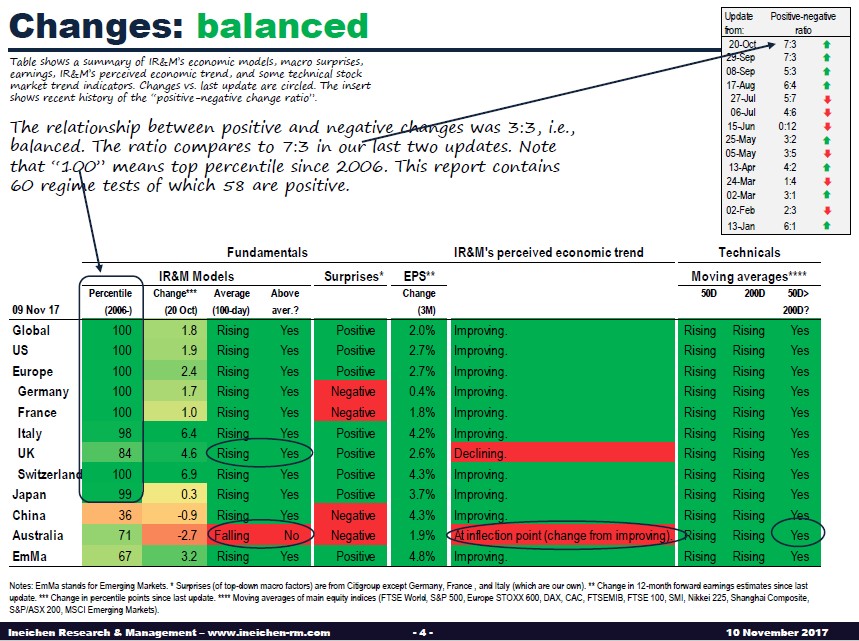 Broadly there are fewer risks, green ticks are a pleasing sight compared to early 2016, illustrated in the top right hand corner of Table 3 which as you can see was lit up with ‘time bombs’.

The sum of positive indicators has stabilised. Key changes over the month include- economic momentum indicators in the UK which have improved; long term FX momentum in Japan has turned negative as has the 3 month moving PMI indicator in China.

What about Australia?
According to Ineichen’s data, economic momentum may appear positive however it is falling placing Australia at an inflection point. The Australian financial market has finally followed suit of global markets and long term momentum has turned positive. Earnings estimates remain relatively steady and the outlook for Australian financials remains negative.