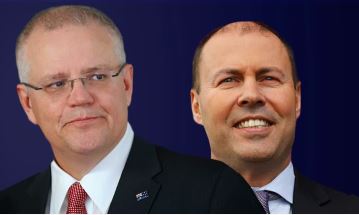 The drama of Australian politics has been exhausting over the last 10 years or more with a ‘revolving door’ of prime ministers. The recent liberal leadership spill is a test of voters’ patience and resolve as they are left in despair of the country’s leadership.

We had our vote at the last election but on Friday no one asked us and perhaps we can rightly feel this is not fair. Apart from the polls – and we will be bombarded with these over the next few weeks – perhaps we can look to another voting machine for some insight.

Whenever there is the threat of change in leadership, the question is asked “what will the markets do?” Forget the Attorney General’s opinion, it’s all about the All Ordinaries index.

Some people also look to the bookies in this great nation of punters (and maybe the markets look to the bookies sometimes as well). At one stage in the last few days these were the posted odds for the Liberal leader at the next federal election when the race opened up:

Just a couple of days ago, Scott Morrison was ranked an outsider with longer odds than Christian Porter and Tony Abbott.
Maybe this is not as ridiculous as it sounds. The great investor Benjamin Graham, is credited with saying “In the short run, the market is a voting machine but in the long run, it is a weighing machine.” I am taking this quote a little out of context and focusing on the first part but I don’t think unreasonably so – there are many market participants that take short term information to make decisions.

There was no doubt some trepidation that Peter Dutton would succeed in the Liberal Party ballot to become Australia’s 30th Prime Minister. He was the agitator, he provided the 43 signatures to trigger a vote and he even walked into the party room with touted kingmaker, Mathias Cormann.

And what happened last Friday?  Below is an intraday chart of the S&P/ASX200 index illustrating what the market did leading up to the party room vote:

You’d be forgiven for thinking the market didn’t have confidence in the favourite horse.

The story wouldn’t be complete if we didn’t show you what happened next and we all like a punchline:

Approval for ScoMo or a relief (phew!) rally?

But what about the rest of the day?

Aha! The day finished around where it began. So what should we make of this?

Had the market already forgotten about the change of Prime Minister by 4pm? Or perhaps the market doesn’t care anymore either. Perhaps the information was voted upon and weighed in just 3.5 hours.

Here is another graphical observation. Its seems currency markets approved of the outcome: