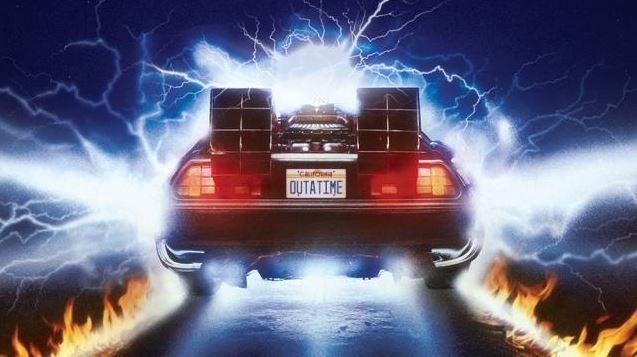 It’s hard to imagine life without Google now that it’s so intertwined with everything we do in terms of using and gathering information.

I mean, how did people settle debates in the past without the ability to Google something? And remember having to stop and ask for directions before Google maps existed?

Google seems like an obvious home run with the benefit of hindsight but it wasn’t a foregone conclusion the company or the stock would be so successful. When I was in college we were forced to use search engines like Alta Vista, Yahoo! or AskJeeves.com when Google was still in its infancy.

None of these other search engines ever really gave you what you were looking for so we were forced to use actual books and periodicals to look stuff up. Talk about the digital Stone Age.

The day Google went public The New York Times wondered “whether the scrappy Internet search engine is really worth $27 billion” because of concerns about their dot-com bubble era line of thinking:

And unlike some of the dot-com-bubble darlings that famously turned to Wall Street to raise cash merely to burn it, Google is a profitable enterprise. But one worth more than $27 billion? Only time will tell if the company can fend off efforts by Yahoo and Microsoft to build superior search engines.

Google still exudes that unabashed Silicon Valley anti-establishment attitude, the kind that made 1999 such fun for a lot of young techies.

Even after they were public for a few years there were still plenty of doubters. Marianne Jennings wrote a book called The Seven Signs of Ethical Collapse which was published in 2006. Jennings does a nice job deconstructing the Enron, Worldcom, and Tyco debacles as a framework for spotting red flags in company management, financial statements, boards, corporate policies, and unethical behavior.

At the end of the book, she then uses that framework to predict companies and industries that could be in trouble in the future. One of the companies she chose is none other than Google.

And honestly the reasons make sense for where the company was at the time:

Their position of being innovators has carried with ith the accompanying earnings that defy gravity. And how does one top being a steady billionaire at that young age?

Sound economics dictate that continuing double- or triple-digit growth is not possible. Beware, those earnings are ad revenues, and there is room for accounting interpretation on booking ad revenues. Remember AOL’s debacle on its methodologies related to ad revenues. The SEC settled those issues for AOL despite its continuing claims of validity through the uniqueness of business. The patterns are easy to spot, and they do repeat.

Some of this could have stemmed from the fact that the dot-com blow-up and Enron fraud were still fresh in people’s minds. There was a natural skepticism of any results that looked too good to be true.

But even those inside some of these behemoth tech companies can’t always predict how these things will work out.

If you put $10,000 into Amazon at their IPO, you would either be one lucky SOB or a liar. It feels like Jeff Bezos could enter any business line or industry he wants and the incumbents would see their stock price get destroyed.

But let’s say you completely missed the first wave of Amazon’s success and instead waited until they decided to take over the world with their Prime membership program. 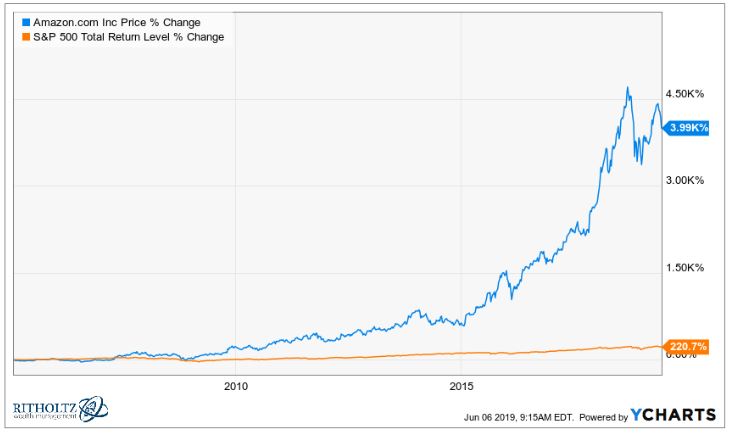 This one feels pretty easy in hindsight. I love Prime. Amazon is the first place I look for nearly anything we need to buy. Prime is the type of program I never knew I needed before but now would have a hard time living without it.

According to Scott Galloway, more Americans have a Prime membership than those who go to church or voted in the 2016 election: 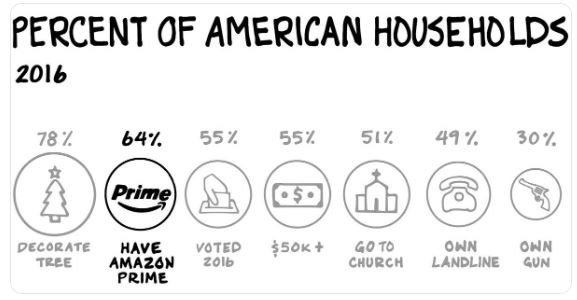 But Prime wasn’t the slam dunk it seems when it was being rolled out. In fact, even the employees who were working on the program firsthand were skeptical at the time.

Jason Del Ray at Recode put together an insightful oral history about how Amazon created the Prime platform. Greg Greeley, the eventual VP of Amazon Prime, discussed some reservations people within the organization had at the time while they were building out the program:

Sometime in December I got this email from one of the engineers on the team saying, “Greg, we’re working so hard on this project and I look at it and as a [shareholder] I’m really scared. I think it’s going to take down the company. Are you sure the math works on this program?”

It was not obvious to even people that were writing the code that it was going to work in the long term.

There were major concerns about the economics of a free shipping program. Amazon’s market cap was still smaller than eBay’s at the time and it wasn’t a foregone conclusion who the winner would be between the online selling platforms.

Prime isn’t the sole reason for Amazon’s success since then. AWS helped a lot and they’ve expanded into other market segments as well. But looking back at an Amazon stock price chart makes it seem like it was a foregone conclusion they were destined to be one of the largest companies in the world.

It’s rare to know which businesses or stocks are going to be successful in the moment. This is why back-tests are easy but front-tests are hard.

The past looks obvious but the future almost always looks messy.

Many good ideas are only known with the benefit of hindsight.

Full Disclosure: Nothing on www.awealthofcommonsense.com site should ever be considered to be advice, research or an invitation to buy or sell any securities, please see my Terms & Conditions page for a full disclaimer.

All opinions expressed on this blog are solely those of Ben Carlson and are in no way affiliated with any other organization or institution. I don’t know or understand the risk profile or time horizon of other investors so any information or opinions contained on this website are not intended to constitute a specific recommendation to make an investment. This blog is intended to share my opinions and not persuade you into to making specific investments. You need to do the homework yourself and make your own choices with your money based on your unique circumstances.

I cannot predict the future. Therefore you will not find any predictions or forecasts of what the future holds for the markets, your investments or the economy. There are far too many unknowns to be able to predict the future, especially of the financial variety. Past performance is not a predictor of future results. Any historical data used on this website is done for the sole purpose of using what has happened in the past to construct a framework for how to view the present situation and make informed decisions about the future.

You need to be aware of the risks involved when investing in financial assets. Any strategies discussed here are done for the sole purpose of putting personal finance, investments, financial markets and the psychology of the market into a common sense point of view. Some of the investments discussed on this blog may fluctuate in value. Again, these opinions are only made available to give you information to make your own decisions.

We all have behavioral biases that affect our decisions and we all make mistakes. I make mistakes all the time. Just remember that you make your own decisions and mistakes. A Wealth of Common Sense is in no way responsible for the decisions that you make. Do your homework after reading this blog or any piece of information that you use to make financial or life decisions. You know your current circumstances better than anyone.