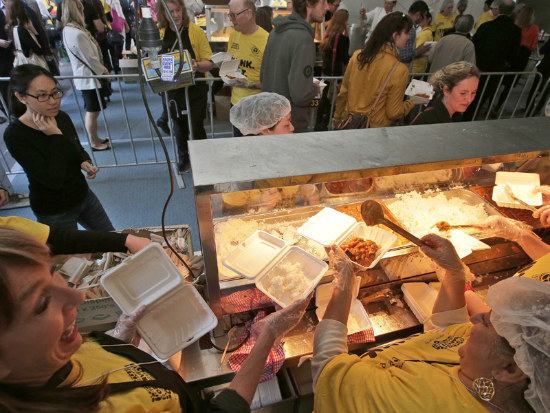 When it comes to food wastage, Australians throw out one in every five shopping bags.

That’s a $1036 grocery shop chucked into the bin each year.

Food rescue charity OzHarvest says the easiest way to be sustainable is to think about reusing your food before throwing it away.

In a world where it takes 1000 litres of water to make one carton of milk, the humble act of using leftovers for lunch or dinner is more helpful to the environment than an electric car or recycling.

That was the message impressed on hundreds of Sydneysiders on Monday at the charity’s annual Think.Eat.Save lunch event, which was replicated across 10 locations nationwide.

Hordes of hungry office workers enjoyed a free lunch from the scraps collected from some of Sydney’s top restaurants.

Rockpool served up beef and lemongrass meatballs, Aria offered a special pork hotdog with bacon jam, and Black Star Pastry turned the cut-offs from their star dessert, the strawberry watermelon cake, into a berry meringue trifle.

Black Star founder Christopher The said his team had constructed 500 desserts from just two days of cut-offs at his bakery, a fact that made his head spin.

“It’s kind of horrible actually, (the level of waste) is disgusting.”

Referring to his own cafe’s kitchen, he said the team uses leftovers for collaborations with other food outlets – be that a gelato crossover with Sydney nitrogen icecream makers N2, or juicing the remains of a watermelon for drinks

He recommended buying in moderate amounts, and thinking before dumping as the best thing people can do at home to act sustainably.

“Just make sure you use what you buy – just buy a little bit at a time,” he told AAP.

“We don’t want people to feel guilty about it, we’re not eco-Nazis, but even just one plate made up of scraps helps.”

And his go to dessert to make from leftovers?

“Jam. Everybody should learn how to use too ripe, slightly bruised fruits like strawberries, to make a delicious jam.”

* Australians throw out $8-10b worth of food annually

* OzHarvest wants people to show off their leftovers online with the #PledgeAPlate hashtag.