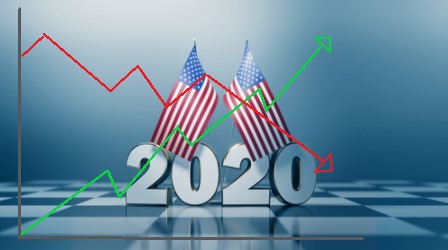 The polls are starting to strongly favour a Democrat victory on 3 November but there’s no doubt that Donald Trump has the potential to deliver a last minute surprise. So should investors play defence now and invest again when we have the result?

Perhaps, but the statistics say no.  It’s uncertainty the markets don’t like and the US share market’s rise in the last week may be largely explained by the reducing risk of a close outcome. The chart below shows the US market has tended to rise during the election period as the outcome and policies become clearer.  History suggests the better strategy is staying invested throughout.  This is why seasoned investors usually say political colours don’t matter at election time.

And if the Democrats do get in, are markets more likely to perform better or worse?  This Schroders chart below suggests that returns have been stronger under the Democrats.

So does this mean we should be increasing our US share allocations?  As always there are plenty more moving parts.  These days investment markets are more influenced by central bank policy interventions and expectations thereof.  Central Bank operations are designed to be independent of politics and keep a very low profile during elections.

One other factor, not so favourable, is that October is by far the most volatile month in the investing calendar, invoking memories of heavy losses in the crashes of October 1987 and 2008.

Our view is that it is inherently dangerous to position portfolios based on short term predictions.  By definition, what moves the market in the short term is the unexpected surprise that the experts didn’t position for.

For our part we operate a consistent advice process with portfolio moves that match timeframes, risk tolerance, opportunity and relative value.  Politics will feature very little in our investment decision making.

However, we should brace ourselves for much more nastiness over the next month if the following chart is to be believed. It seems that more than a third of Americans are now open to political violence, a statistic that has tripled under the current administration.

Source: Politico, with thanks to L1 Capital’s Alex Ordon

As always, if you are uncomfortable with your investment positioning, please don’t hesitate to contact us.