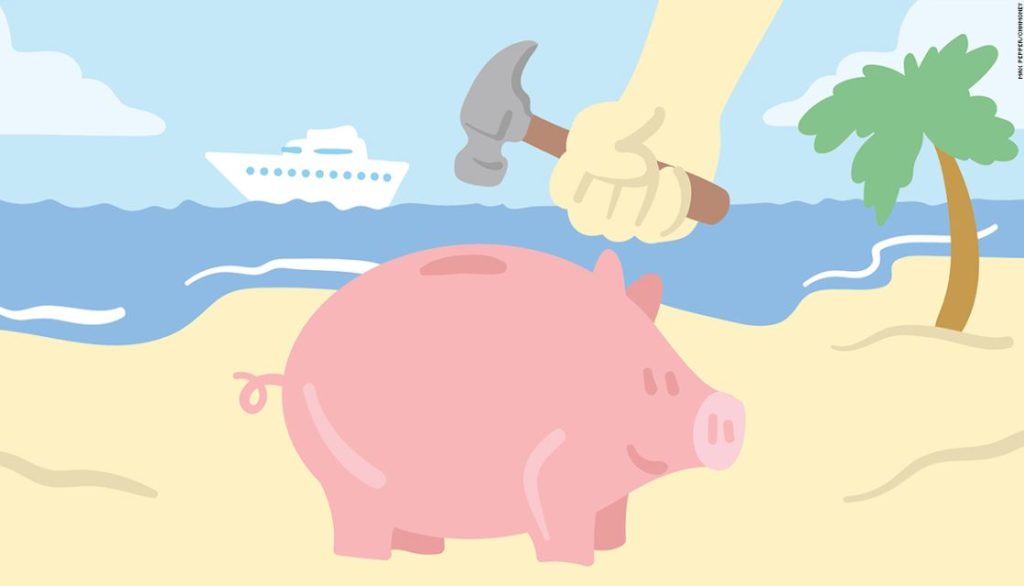 While there has been an ongoing fear that the brave little Australian economy — bullet proof for now on 26 years — may be collateral damage in another global cataclysm, the bigger concern is right here.

Key points:
• Household are digging into savings for day-to-day items
• Wages as a share GDP are their lowest in 50 years, while the share from profits is rising
• Real wages are likely to fall in 2017 and 2018 according to Morgan Stanley analysis

Don’t fret about too much about China sinking under a mountain of debt, the European Union becoming unstitched or the untested world of Trumpenomics, we could be undone by something we love — buying fun stuff.
It isn’t a sinkhole in the backyard just yet, but discretionary spending is getting dangerously soft, undermined by weak wages growth and the rising cost of living.
There is very much a “Yin and Yang” thing in consumer spending — a bit like the duality of good and bad debt described by Treasurer Scott Morrison.
Yin spending is dark, negative and not much fun — think paying electricity or insurance bills — or as economists prosaically call it “non-discretionary consumption”.
Yang, or discretionary spending, is vibrant, positive, often fun and stimulatory — when not financed by crippling debt.
Right now the yin is the dominant force in consumption.

The March quarter GDP numbers bear this out.
Household consumption added 0.5 per cent to GDP, just enough to haul it into growth.
But the big increases were in “essentials” such as utilities, rent, insurance and health.
Discretionary spending grew too, but it was no party.

There has been no big economic shock, just a grinding reality as consumers have been if not on strike, then certainly on an economically debilitating go-slow.

Investors have sniffed the wind and bailed out too.
Consumer-linked stocks have seen their value tumble around 20 per cent so far this year, compared to a 4 per cent gain in the broader market.
The negative sentiment in turn flows through to shops closing their doors and job losses.
With retail being the biggest employers around, that means a whole lot more economic “yin”.

Hey, where have my savings gone?
As the GDP — or more correctly “National Accounts” — data shows, not only is spending weak, consumers are dipping into their savings to pay for largely “essential” things.
“To support consumption, household savings were unwound from 5.1 per cent to 4.7 per cent of disposable income, the lowest since the GFC, Citi’s Josh Williamson said.
There is a simple reason for this — wage growth is feeble.
So feeble in fact that wages as a share of GDP hit there lowest point in the March quarter since 1964.
Disturbingly, there is a limit to chewing through savings just to pay for day-to-day necessities. When the savings are gone and wages don’t grow, then what?

Not surprisingly, as wages shrink as a percentage of GDP, corporate profits grow, with their share of GDP now at a six-year high.

The rising tide of profits is largely flowing into mining companies, not pay packets.
It is being driven by the surging commodity prices, evidenced in the first quarter terms of trade rising by 25 per cent from a year ago, as well as a much reduced workforce in the sector.
It is not money flowing back into the “real” economy and domestic consumption.
“Good” discretionary spending could yet bounce back, but that would need a few things to go right.
“Hopefully the recent rebound in profits will feed into a stronger appetite for hiring and investment but so far the signs remain at best mixed,” Mr Williamson says.
“Employment growth is solid, but not enough to unwind things and investment intentions aren’t great either.”

You think it’s bad now, it could get worse
And here is where things get nasty.
“Australia is further decoupling from the global recovery, with the consumer facing a domestic cash flow and credit crunch,” argues Morgan Stanley’s Daniel Blake.
“Wage growth remains absent, and underemployment high, while conditions are slowing in two of the most labour-intensive sectors — housing and retail
“All up, we forecast a real pay cut of 2.7 per cent in 2017 and 1 per cent in 2018, meaning that consumption will struggle to grow even when Australia’s robust 1.5 per cent population growth is taken into account,” he said.

This is at a time when the savings buffer is at least half exhausted, and the wealth created by the property boom is slowing.
The fact that the economy continues to plod along at sub-trend growth is seen as something of a victory, but look a bit deeper and there is little going on to replace the mining or housing booms that are rapidly running out of steam.

Taken in isolation, domestic demand very weak, growing on average just 1.2 per cent since 2013, half the rate of GDP growth.
The difference has been more than made up by net exports which have been contributing 1.3 per cent growth to GDP over the same period.
In other words, the domestic economy — the bit we work and live in — has been struggle street, but you wouldn’t know it by looking at quarterly GDP numbers.
“It is nothing to be proud of,” Citi’s Mr Williamson says.
It also something to worry about given 60 per cent of GDP is consumer related, and consumers are on balance deeply in Yin, rather than Yang mode and are likely to be that way for some time yet.