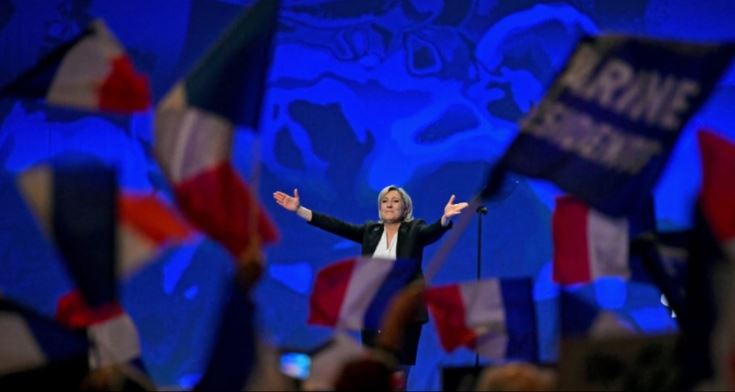 Australian media are all over the British election recently called by Prime Minister Theresa May. Given our colonial background and shared language, it is no surprise the UK election is taking up more space in our newspapers than Sunday’s French election.

This is a shame because the French election could be catastrophic for Australia, delivering a greater local impact than Ms May’s almost certain landslide return to Downing Street and the continuity of Brexit (the UK departure from the European Union).

The UK leaving the EU is not a catastrophe for the EU. The British were never ‘comfortable’ members and a British exit from the political and trading block is seen by many as removing an unwelcome guest from a party.

The French, on the other hand, are one of the party hosts. France leaving would be a different matter altogether.

The French election may well see two anti-EU candidates fight each other in the last round of voting. If this were to be the case and France left the EU, then all bets on global trade would be off and global markets may well go into a tailspin.

The UK leaving the EU is now certain. But it was never surprising. France leaving the EU would be a huge shock, as it kills the idea of European unity.

But could this happen? In short, yes.

One needs to understand the French voting system, which differs greatly from the Australian system. Firstly, France votes for a president who has enormous international powers, but few domestic powers, the latter resting with the Prime Minister and parliament.

Secondly, French elections are strung out over two rounds. There is no preferential voting, as we have in Australia. There are five main candidates running in this Sunday’s first round.

If no one wins 50 per cent of the vote — and there is almost no chance of that happening — then the top two contenders run-off against each other on May 7. And here is how it is loking.

Of the five main candidates, four are polling between 19 and 24 per cent and one is way down at 8 per cent. Nearly 10 per cent of the population tell pollsters they are undecided.

Emmanuel Macron, the centrist former minister is on 24 per cent, with a brand new political party.

François Fillon, the leader of the establishment centre-right party is on 19.6 per cent.

Jean-Luc Mélenchon, the leader of the far left anti-EU party is also on 19 per cent.

Benoit Hamon, leader of the current President’s Socialist Party brings up the rear on 7.3 per cent.

If one took the polling on face value then it looks like Mr Macron will run off against Ms Le Pen, pitting a centrist against the far right. Most commentators agree that in such a circumstance Mr Macron would win. This would be a good outcome for stability.

However, what if some of Hamon’s supporters and some of the undecided voters, voted for the far left instead of the Socialists? What if some of Mr Macron’s voters switched to Mr Fillon?

Imagine if we ended up with Ms Le Pen on 23 per cent, Mr Mélenchon on 22 per cent, Mr Macron and Mr Fillon on 21 per cent each and the rest going to small parties? This is not outside the realms of possibility.

This could happen. Many in France are disillusioned with politics and may express their disillusionment on the fringes.

If Ms Le Pen and Mr Mélenchon are chosen to run off against each other brace for the world’s stock markets to dive on Monday.

French election: what you need to know

There are two rounds of voting, with 11 candidates declared for the first round. In the unlikely event of a candidate getting more than 50 per cent of the vote, they would be elected on Sunday. Barring that, the two leading candidates will advance to a deciding round on May 7.

Likely second-round candidates: Current forecasts suggest Emmanuel Macron and Marine Le Pen will reach the second round. However, polls have tightened in the past two weeks and Gaullist Francois Fillon and leftist Jean-Luc Melenchon could yet secure one of the berths, with the top four all polling between 18 per cent and 24 per cent.

Is winning the first round an advantage? Well it is certainly better than losing, but there are plenty of historical precedents for a turnaround between the two rounds. In 1995, for example, Jacques Chirac claimed second place in the first round, then beat first-round winner and Socialist Lionel Jospin in the run-off.

This year’s race is even more unpredictable as it is not clear what sort of choice the voters will have in round two. It could be anything from a far right/centre right contest between Le Pen and Fillon, to a clash between two former Socialists, Macron and Melenchon.

There will also be horse-trading between the rounds, with the remaining candidates eager to secure the endorsement of the nine eliminated on Sunday.